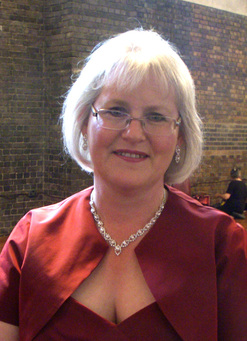 She then went on to train to be a teacher at Kingston Polytechnic and is presently Coordinator of Creative and Performing Arts at Greenbank Primary School. For many years she enjoyed both solo and choral singing with the Royal Liverpool Philharmonic Choir and the Cantata Choir of the Metropolitan Cathedral.

She is presently a member of a local madrigal group ‘Hope St Waits’, the ‘Liverpool Pilgrim Singers’, the ‘Metropolitan Cathedral Consort’ and the ‘Cathedral Chamber Choir' at Liverpool Cathedral.

Her solo repertoire is wide ranging from Early Music with the ‘Musicians of Clerkenwell’ and the ‘Hope St Waits’ through to the works of modern composers such as Tavener and Maxwell-Davies; recent work has included Messiah, St John Passion, Haydn’s Season’s, St Nicholas Mass and Creation Mass, Bernstein’s Chichester Psalms, The Pilgrim’s Journey by Vaughan Williams, the Requiem and Mass of the Children by John Rutter and as well as Carl Nielsen’s Springtime on Funen.
Now residing on the Wirral with her husband Jonathan Heyes and their two children, Patricia is still very much in demand as a soloist throughout the Merseyside region for concerts, functions and broadcasts, however, much of her spare time is now taken up with encouraging young people to sing in her school choir.